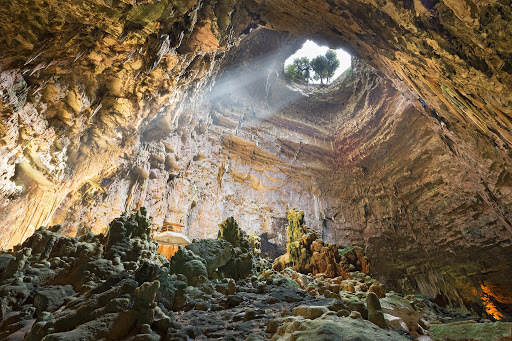 For those who want to spend a holiday in Puglia all the adventure and the discovery of unique and wonderful places, we at Masseria Baroni Nuovi invited the visit to the complex of the Castellana Caves.

About an hour away from our farmhouse in the province of Brindisi, the Castellana Caves represent a speleological complex of international renown, among the most important in Italy and Europe.

Discovered back in 1938 by the speleologist Franco Anelli, the Caves of Castellana are particularly appreciated for the richness of their crystalline concretions, the remarkable extension and the spectacular vastness of the natural galleries, all the elements that contribute to an extraordinary natural architecture, unique in the world.

These are nothing more than the result of the erosive action of an ancient underground river that has dug and shaped limestone for centuries, the soul of the Bari Murgia.

Among colossal stalagmites and stalactites and large caves adorned with games of shapes and colors, it is possible to see the White Grotta, the Cave of the Altar, the Cave of the Dome and the Passage of the Crib, where a stalagmite from the refined Marians called Madonnina delle Grotte lies .

The origins of the Castellana Caves date back to the Upper Cretaceous, between 90 and 100 million years ago, when Puglia was completely submerged by the sea and colonies of molluscs and marine vegetables lived here that, dying, deposited on the seabed.

Around 65 million years ago there was a rise in the lands, the rise in the thick layer of limestone formed by the remains of animals and plants and the formation of cavities.

A rich cave fauna characterizes the Castellana Caves. A popular site, in addition to the bat, which is present in five different species, are crustaceans, pseudoscorpions, beetles and a particular grasshopper.